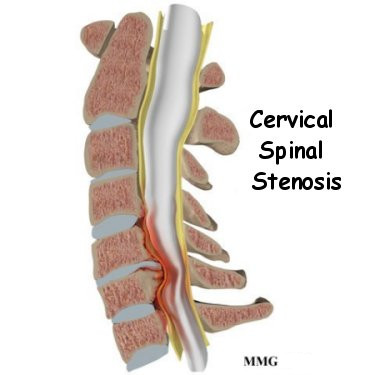 Cervical stenosis consists of a narrowing of the canal that contains and protects the spinal cord in the cervical area (neck and upper back). Stenosis can occur virtually anywhere in the spine, although it is most common in the lower back or cervical area.

Cervical stenosis causes that when the medullary canal narrows, the nerves that leave it can be compressed or pinched, causing pain in the cervical area itself that can extend to the shoulders or arms.

Depending on the intensity and the nerves pressed, the pain will appear in one part or another and with greater or lesser intensity.

Most cases of cervical stenosis are given by age and by the degenerative process that usually occurs in these cases. From 45-50 years the spine begins to weaken in general, and more specifically, intervertebral discs can lose some of their normal functionality, and their ability to cushion and become narrower.

This process does not take place in all elderly people, and even if it does take place, some people will never have the symptoms of cervical stenosis by having a wide enough canal or by not compressing any nerve.

It is very important that this disease is diagnosed very quickly since it could have very serious consequences even at the neurological level, so if you feel any of these or similar symptoms, it is important to see a doctor in order to treat the disease as soon as possible to avoid major damage in the future.

Other obvious symptoms of cervical stenosis are those that cause compression or pinching of the nerves that can radiate pain to the arms. They can also cause, in more severe cases, lack of strength or numbness. In cases of high severity, the muscles of the arms and hands can become thin.

These are just some of the normal symptoms of cervical stenosis, but because of the seriousness of the fact that a nerve is compressed, it is important to see a doctor to diagnose the disease being treated as quickly as possible and propose an effective treatment.

You might also want to read: How to treat cervicalgia?